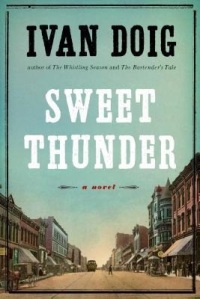 Last week I reviewed “Sweet Thunder,” by Ivan Doig, about a newspaperman doing battle with a colossal mining company in Butte, Montana. 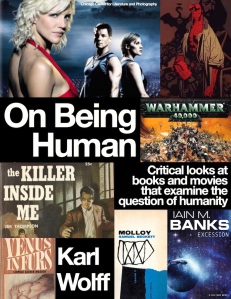 And after much delay, my own book, On Being Human, will be released by the Chicago Center for Literature and Photography.  Jason Pettus, founder of CCLaP, has this to say about On Being Human:

And speaking of staffers and their monthly themed essay series turned into books, we’re just a week away from releasing our latest, Karl Wolff’s On Being Human. Regular readers will remember that the majority of this book’s contents ran monthly throughout 2012, when Karl looked at such diverse topics as Battlestar Galactica, Samuel Beckett and the “Warhammer 40,000” roleplaying game to really examine what artists over the decades have had to say about the human race and what defines it; for this book version we’ve included three brand-new essays that have never appeared at the blog before, plus of course with the entire thing gathered up into the bound sit-down-and-read-all-at-once edition that it’s been envisioned as from its start. This has been a long time coming — it was supposed to be out last January, but the aforementioned growing pains we’ve had this year have delayed it for this long — so we’re all especially glad to see this one finally getting out to the general public soon. As always, more information on the free ebook and handmade paper edition of On Being Human next week, when it’s been officially released. Thanks as always to all of you for your patience with our sometimes long delays this year, whether that’s referring to blog updates, book reviews or mailed orders, and I’m looking forward to CCLaP being a much more robust organization this fall and winter, that is cranking out its stuff with a lot more regularity than we have been recently.